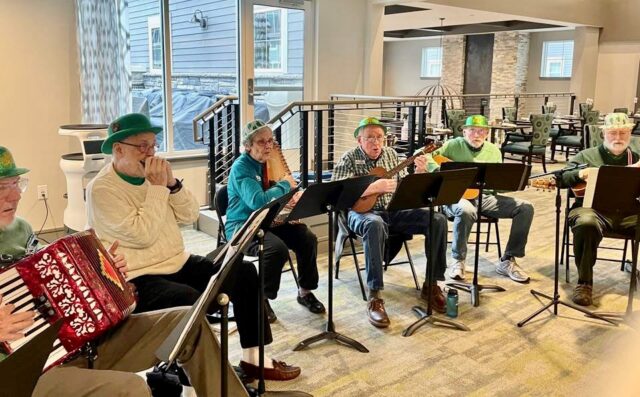 At RiverWoods Durham, there are many opportunities for residents to tap into their musical side, whether they have experience, or are exploring an instrument for the first time.

“The opportunity offered by moving to RiverWoods has allowed me to play.” – Dwight Baldwin

Dwight has fully immersed himself into the musical culture at RiverWoods Durham. He started the River Ramblers shortly after moving in, when he asked a friend if he wanted to play together. They soon found many other residents were interested. The River Ramblers is a resident-run musical group performing on a range of musical instruments including ukuleles, guitars, accordion, harmonica, percussion, and a lap harp. Formed from a common desire to make music together and host sing-a-long events, they now perform frequently for the community throughout the year. Earlier this summer, the Ramblers hosted an old-fashioned Hootenanny.

Watch: The RiverWoods Durham Ukulele Band, a video interview of Dwight and the other Ramblers taken in March of 2021.

Dwight is also a member of RiverWinds. This group of eight was founded upon an appreciation for Native American culture. They play with handmade Native American flutes made from Japanese Knotweed grown and harvested on campus, as well as Sunflower stalks. 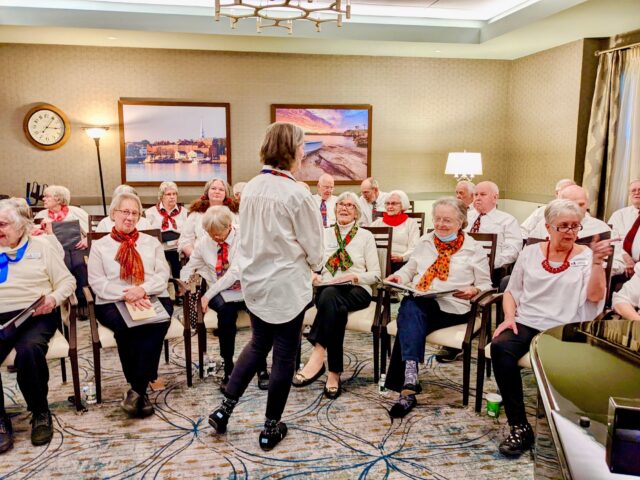 Led by choral director Mary Doane, a staff member well-admired by the residents, the chorus is currently comprised of 25 residents and open to anyone who wishes to join. According to Dwight, “she’s a wonderful, fantastic director.” The group enjoys a variety of music and performs four times each year. They recently performed a series of songs inspired by summer.

“The music is the biggest draw.” Bill Ingraham

Bill, the choral co-chair, loves singing in a big group and feels it’s a great way to meet people. Long involved in vocal performance, Bill joined the chorus the second it was available. Prior to moving to RiverWoods, Bill had a strong background in music. He started playing an instrument in middle school and sang in the high school chorus. He then went on to Tufts University, where he performed in an acapella group. Prior to moving to RiverWoods, he sang with the Rockingham Choral Society here in New Hampshire. In addition to being a member of the chorus, he is a member of Team Seacoast, a group dedicated to assisting in the resettlement of Afghan refugees in New Hampshire.

Did You Know Listening to Music Actually Helps Your Brain?

Research shows that listening to music can improve cognitive skills and abilities, working memory, and recognition memory. Not to mention the joy music brings for performers and listeners alike!

Ready to learn more about the many musical opportunities available at RiverWoods Durham? Our Senior Living Counselors would love to give you a tour!