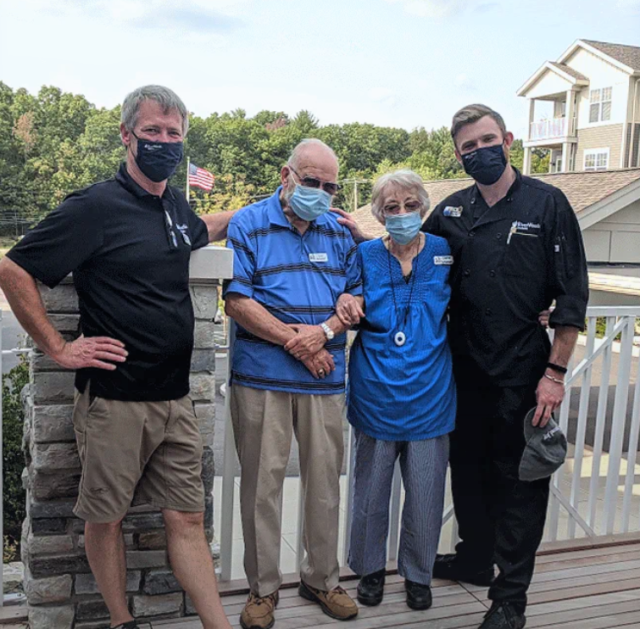 A Place to Live As Well As a Place to Work

Don and Elaine Sylvester are among the First Residents who moved in eight months ago, just after the community opened. Their son, Mark Sylvester, is part of the Facilities Team and drives the RiverWoods Durham shuttle. Mark’s son, Tyler, is the Sous Chef on our Culinary Services team!

How did it all happen for the Sylvester family?

Tyler has been a part of the RiverWoods family for four years, working at RiverWoods Exeter at The Boulders. He was the first to hear about the possibility of a new RiverWoods community being planned for Durham and shared that information with his grandparents. When the information was confirmed and a public announcement was made, Don and Elaine jumped at the chance to get on the waiting list! They knew many good friends who had lived at RiverWoods Exeter. Having lived in Madbury, NH for forty years, Don and Elaine loved the idea of the RiverWoods way of life, but closer to their home community. 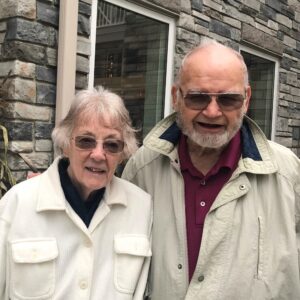 “We love having a son and a grandson so close by. Sometimes we’re able to wave to each other and once in a while say ‘hello’ as they go about their jobs. They love interacting with the residents and we enjoy seeing them happy.”

The only downside to living where your son and grandson are working? Trying to remember that they are working “…we have time to chat, but sometimes they do not — the shuttle has to leave on time, and dinner has to be prepared,” Elaine remarked.

Don and Elaine had not intended to make a fuss about being related to the Sous Chef on campus, but their grandson had other ideas. “Our first day in the bistro, as we entered, suddenly there appeared Tyler and the whole dining staff waiting to be introduced to his grandparents. It was unexpected and wonderful. We are notorious!”

More than Just a Paycheck

Mark Sylvester joined RiverWoods after a career in the computer industry. His previous positions, in his own words, always made him feel like something was missing at the end of the day. 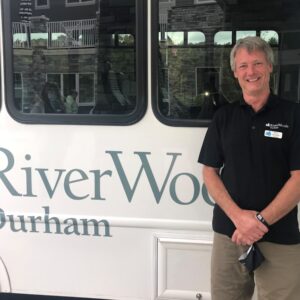 “My position at RiverWoods has given me something that I felt I was lacking;  a sense I was contributing in a positive way to improve the lives of those around me. As I get older I realize that the circle of life includes returning the patience, the care, and the love that my parents gave to me as a child with patience, caring, and love given back to them. Working at RiverWoods gives me not only the opportunity to help my parents but the parents of so many others as well!”

Are you interested in making a difference while making a living? RiverWoods is hiring! See what opportunities are available now at Careers.RiverWoodsGroup.org.